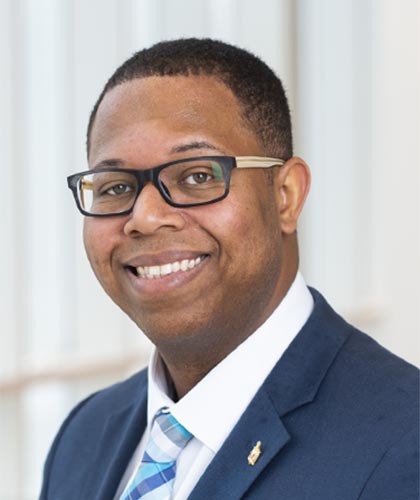 Kevin M. Daniels is an Assistant Professor in the Department of Electrical and Computer Engineering with a joint appointment at the Institute for Research in Electronics and Applied Physics. Dr. Daniels received his B.S., M.E. and P.hD. in electrical engineering from the University of South Carolina in 2009, 2012, and 2014, respectively. From 2014 to his start at UMD, Dr. Daniels served as a National Research Council Postdoctoral Fellow residing at the U.S. Naval Research Laboratory (Washington, D.C.). There he investigated the epitaxial growth of wide bandgap materials, like silicon carbide (SiC), for power electronics and two-dimensional epitaxial graphene for high speed communications and sensors.

His current research interest include the growth of various metallic, semiconducting and insulating two-dimensional materials, particularly transition metal oxides and dichalcogenides, for environmental and biological sensors, batteries, and fuel cells. He has co-authored over 30 publications in the fields of material growth, electrochemistry and plasmonics and has given over 20 conference presentations.

Prof. Kevin Daniels and his colleagues develop portable ultra-fast detection of COVID-19 through the fabrication of robust sensors with high sensitivity and selectivity.