It's not at every university that laser pulses powerful enough to burn paper and skin are sent blazing down a hallway. But that’s what happened in UMD’s Energy Research Facility, an unremarkable looking building on the northeast corner of campus. If you visit the utilitarian white and gray hall now, it seems like any other university hall—as long as you don’t peek behind a cork board and spot the metal plate covering a hole in the wall.

But for a handful of nights in 2021, UMD Physics Professor Howard Milchberg and his colleagues transformed the hallway into a laboratory: The shiny surfaces of the doors and a water fountain were covered to avoid potentially blinding reflections; connecting hallways were blocked off with signs, caution tape and special laser-absorbing black curtains; and scientific equipment and cables inhabited normally open walking space.

As members of the team went about their work, a snapping sound warned of the dangerously powerful path the laser blazed down the hall. Sometimes the beam’s journey ended at a white ceramic block, filling the air with louder pops and a metallic tang. Each night, a researcher sat alone at a computer in the adjacent lab with a walkie-talkie and performed requested adjustments to the laser.

Their efforts were to temporarily transfigure thin air into a fiber optic cable—or, more specifically, an air waveguide—that would guide light for tens of meters. Like one of the fiber optic internet cables that provide efficient highways for streams of optical data, an air waveguide prescribes a path for light. These air waveguides have many potential applications related to collecting or transmitting light, such as detecting light emitted by atmospheric pollution, long-range laser communication or even laser weaponry. With an air waveguide, there is no need to unspool solid cable and be concerned with the constraints of gravity; instead, the cable rapidly forms unsupported in the air. In a paper accepted for publication in the journal Physical Review X the team described how they set a record by guiding light in 45-meter-long air waveguides and explained the physics behind their method.

The researchers conducted their record-setting atmospheric alchemy at night to avoid inconveniencing (or zapping) colleagues or unsuspecting students during the workday. They had to get their safety procedures approved before they could repurpose the hallway.

“It was a really unique experience,” says Andrew Goffin, a UMD electrical and computer engineering graduate student who worked on the project and is a lead author on the resulting journal article. “There's a lot of work that goes into shooting lasers outside the lab that you don't have to deal with when you're in the lab—like putting up curtains for eye safety. It was definitely tiring.”

All the work was to see to what lengths they could push the technique. Previously Milchberg’s lab demonstrated that a similar method worked for distances of less than a meter. But the researchers hit a roadblock in extending their experiments to tens of meters: Their lab is too small and moving the laser is impractical. Thus, a hole in the wall and a hallway becoming lab space.

“There were major challenges: the huge scale-up to 50 meters forced us to reconsider the fundamental physics of air waveguide generation, plus wanting to send a high-power laser down a 50-meter-long public hallway naturally triggers major safety issues,” Milchberg says. “Fortunately, we got excellent cooperation from both the physics and from the Maryland environmental safety office!”

Without fiber optic cables or waveguides, a light beam—whether from a laser or a flashlight—will continuously expand as it travels. If allowed to spread unchecked, a beam’s intensity can drop to un-useful levels. Whether you are trying to recreate a science fiction laser blaster or to detect pollutant levels in the atmosphere by pumping them full of energy with a laser and capturing the released light, it pays to ensure efficient, concentrated delivery of the light.

Milchberg’s potential solution to this challenge of keeping light confined is additional light—in the form of ultra-short laser pulses. This project built on previous work from 2014 in which his lab demonstrated that they could use such laser pulses to sculpt waveguides in the air.

The short pulse technique utilizes the ability of a laser to provide such a high intensity along a path, called a filament, that it creates a plasma—a phase of matter where electrons have been torn free from their atoms. This energetic path heats the air, so it expands and leaves a path of low-density air in the laser’s wake. This process resembles a tiny version of lighting and thunder where the lightning bolt’s energy turns the air into a plasma that explosively expands the air, creating the thunderclap; the popping sounds the researchers heard along the beam path were the tiny cousins of thunder.

But these low-density filament paths on their own weren’t what the team needed to guide a laser. The researchers wanted a high-density core (the same as internet fiber optic cables). So, they created an arrangement of multiple low-density tunnels that naturally diffuse and merge into a moat surrounding a denser core of unperturbed air.

The 2014 experiments used a set arrangement of just four laser filaments, but the new experiment took advantage of a novel laser setup that automatically scales up the number of filaments depending on the laser energy; the filaments naturally distribute themselves around a ring.

The researchers showed that the technique could extend the length of the air waveguide, increasing the power they could deliver to a target at the end of the hallway. At the conclusion of the laser’s journey, the waveguide had kept about 20% of the light that otherwise would have been lost from their target area. The distance was about 60 times farther than their record from previous experiments. The team’s calculations suggest that they are not yet near the theoretical limit of the technique, and they say that much higher guiding efficiencies should be easily achievable with the method in the future. 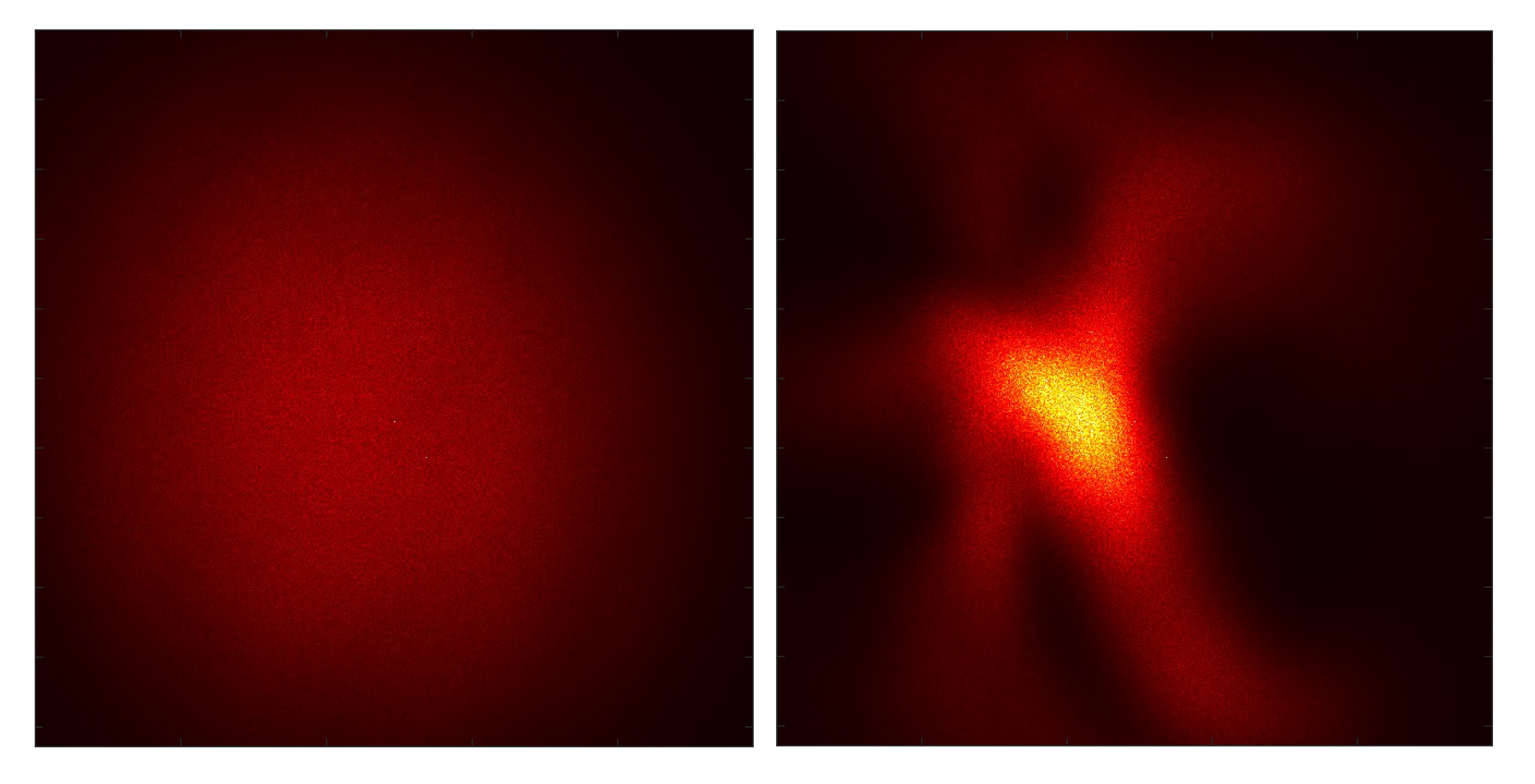 Image Caption: Distribution of the laser light collected after the hallway journey without a waveguide (left) and with a waveguide (right

“If we had a longer hallway, our results show that we could have adjusted the laser for a longer waveguide,” says Andrew Tartaro, a UMD physics graduate student who worked on the project and is an author on the paper. “But we got our guide right for the hallway we have.”

The researchers also did shorter eight-meter tests in the lab where they investigated the physics playing out in the process in more detail. For the shorter test they managed to deliver about 60% of the potentially lost light to their target.

The popping sound of the plasma formation was put to practical use in their tests. Besides being an indication of where the beam was, it also provided the researchers with data. They used a line of 64 microphones to measure the length of the waveguide and how strong the waveguide was along its length (more energy going into making the waveguide translates to a louder pop).

The team found that the waveguide lasted for just hundredths of a second before dissipating back into thin air. But that’s eons for the laser bursts the researchers were sending through it: Light can traverse more than 3,000 km in that time.

Based on what the researchers learned from their experiments and simulations, the team is planning experiments to further improve the length and efficiency of their air waveguides. They also plan to guide different colors of light and to investigate if a faster filament pulse repetition rate can produce a waveguide to channel a continuous high-power beam.

“Reaching the 50-meter scale for air waveguides literally blazes the path for even longer waveguides and many applications”, Milchberg says. “Based on new lasers we are soon to get, we have the recipe to extend our guides to one kilometer and beyond.”

List of authors not mentioned in the body of the story: In addition to Milchberg, Goffin and Tartaro, Aaron Schweinsburg and Anthony Valenzuela from the DEVCOM Army Research Lab, and Eric Rosenthal from the Naval Research Lab are also authors and Ilia Larkin, a former UMD graduate student and current systems engineer at KLA, is a co-lead author.

PI affiliations: Howard Milchberg is jointly appointed to the departments of Physics and Electrical and Computer Engineering and is affiliated with the Institute for Research in Electr.onics and Applied Physics. 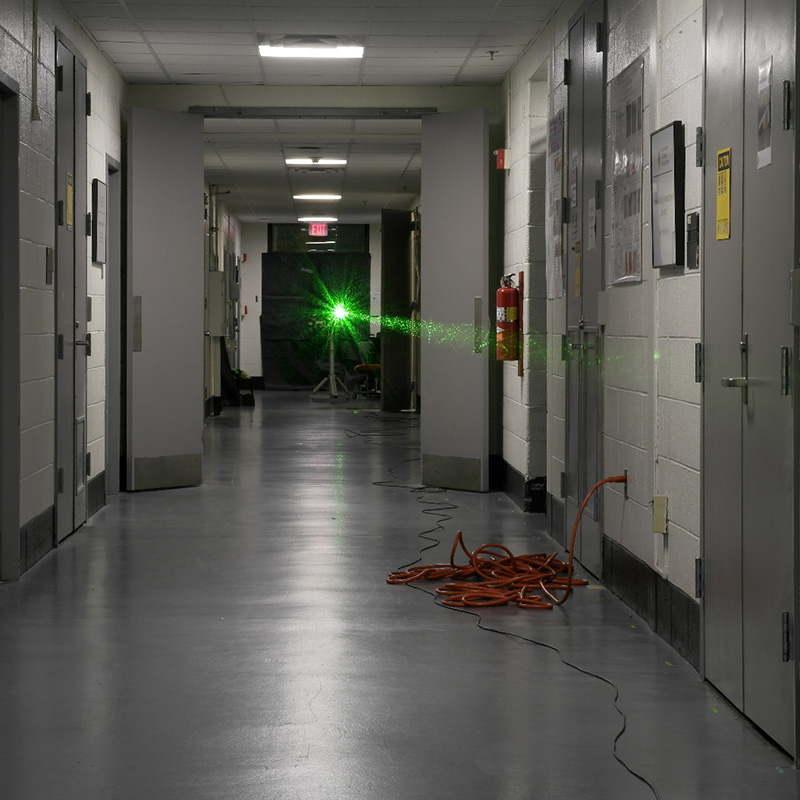 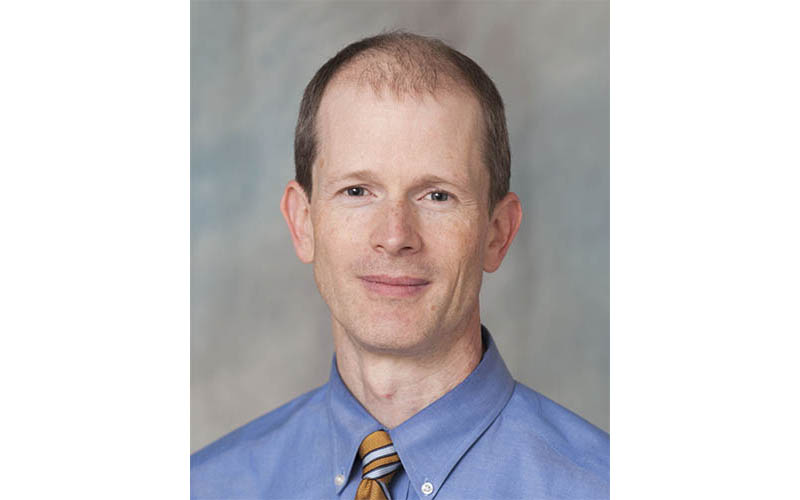 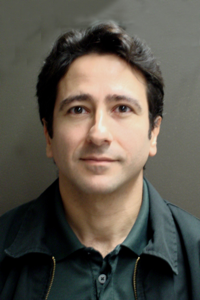