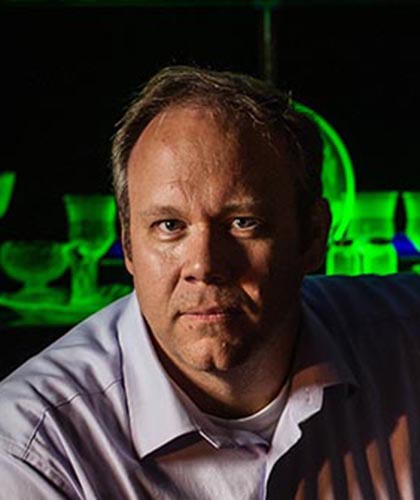 • Washington Post, “How Nazi Gzermany got a lot closer to building a nuclear weapon in WWII,” May 12, 2019

• symmetrybreaking article on the “Physics of Scotch Tape,” January 2011

My research interests cover a broad range of topics in the realm of radiation and nuclear science and technology, including the generation, detection, and manipulation of neutrons, charged particles, and EM radiations.  My background is in intense electron and ion beam accelerators and their associated beam optics. I now apply these machines to novel energy storage materials and devices, materials development for and characterization of radiation hard devices and detectors, and high-power RF sources.

CERN's LHC CMS SRPD Detector.  Heavy ion collisions (Pb-Pb) at the LHC CMS detector can occur in a variety of manners.  They can be head on, peripheral, or somewhere in between.  Each of these have an impact on the subsequent quark gluon plasma conditions.  It is important to identify these characteristics of the collision.  This is partially accomplished in the Zero Degree Calorimeter (ZDC) Spectator Reaction Plane Detector (SRPD).  Neutrons and other neutrals from the collisions continue to travel straight from the interaction point with approximately the beam energy.  Since they are neutral they are unaffected by the subsequent LHC bending magnets.  The so-called spectator neutrons from the collision carry with them information about the dynamics of the collision.  The SRPDs are comprised of an array of quartz blocks, and are located between the EM & hadronic sections of the ZDCs.  Neutrons and other EM induced showers interact with the SRPD quartz elements and radiate due by Cherenkov Radiation. The subsequent light is captured by wavelength shifting fibers and transported to photomultiplier tubes.  The radiation environment is harsh, quickly impacting the performance of the detector.  At UMD, Koeth and his team in collaboration with the UMD Radiation Facilities are characterizing the radiation damage of these devices so as to calibrate for signal loss and to implement a design for a new radiation hard detector.

Neutron Imaging is in many ways the perfect complement to x-ray radiography.  X-rays can "see" through soft material while not high-Z material such as lead.  Neutron Imaging (AKA Neutron Radiography) has just the opposite ability.  Neutrons can penetrate lead but are brought to halt in water and plastics.  While X-ray systems are plentiful, neutron imaging systems are not.  In 2015 Koeth and his team developed a neutron imaging station at the Maryland University Training Reactor, a 250 kW TRIGA reactor.

FUND - Far Ultraviolet Neutron Detector.  Thermal neutron detection is critical to homeland security, oil logging industry, nuclear criticality facilities, and general nuclear research. The standard neutron detector for such applications consists of pressurized proportional detectors loaded with several atmospheres of expensive and rare 3He. In addition to the scarcity, 3He detectors require high voltage and are necessarily limited to cylindrical geometry, which is then subject to microphonics, shock, and sensitivity to variation in bias high voltage. 3He detectors are also gamma sensitive. This limits the quantity and subsequently the coverage area of detections systems (as opposed to large gamma ray detector arrays). Hence, there is strong motivation to develop alternative neutron sensing materials that can be used to replace 3He and used for large-scale deployment. Recent preliminary work by Michael Coplan, Tim Koeth, and their collaborators have developed scalable carbon substrates, including planar, cylindrical, and 3-D reticulated vitreous foams coated with isotopically enriched 10B immersed in a scintillating noble gas. The scintillation light is then collected by a UV sensitive PMT or SiPM. Koeth has proposed a new material solution that overcomes the present challenges.  Unlike the 3He, our 10B coated based detectors are not limited to simple cylindrical geometry, rather they are scalable in both geometry and size and are insensitive to microphonics and do not require HV for primary operation.

SIR (Small Isochronous Ring) is a low-energy ion storage ring that has been brought to UMD from MSU during the summer of 2019.  Koeth and his team will use this ring to study the storage of intense ion beams.  This machine is very accessible and is heavily used in undergraduate research and education.

The Cyclotron:  For more than two decades Tim Koeth has been involved in an ongoing cyclotron project that has evolved into a one-of-a-kind instructional accelerator program. Initially started in his parent’s basement in the 1990s, moved to Rutgers University in 2000, and recently (2016) moved to UMD where it is the centerpiece of a Capstone Design class.  For more information about the cyclotron please go to the cyclotron website.

Betatron Project. Tim Koeth is revisiting an old concept with new techniques - the Plasma Betatron.  The concept of the betatron (or electron induction accelerator) was invented by Don Kerst in 1941.  Koeth is designing a varient that utilizes a pinched plasma to seed the electron beam.  This will generate an intense electron beam of tunable energy from which to generate high-energy broad-band photon (bremsstrahlung) source

UMER Non-linear Optics Project. In 2013 Koeth proposed that the UMER Group apply Nagaitsev & Danilov's idea of using non-linear magnets for the storage and transport of high intensity charged particles to our storage ring.  The group proceeded with the idea. Dr. Kiersten Ruisard (now at ORNL) received her PhD on designing and modeling an experiment for UMER.  As of summer of 2019, an octupole based quasi-integrable insertion was experimentally tested and the work is being continued by graduate student Levon Dovlatyan.

High Resolution Gamma Ray Spectroscopy using High Purity Germanium (HPGe) is a continuous project for Koeth.  HPGe spectroscopy is an analytic technique to identity and quantify gamma emitting radionuclides.  This has applications from environmental measurements to neutron activation analysis.  Koeth has been a gamma spectroscopist for over 25 years.

Mystery of the German Uranium Cube is a history of science project undertaken by Koeth and his Post-Doc Mimi Hiebert that is seeking to learn the meandering path a 5 pound block of natural uranium that landed in Koeth's hand's in 2013.  Koeth and Hiebert have written an article in Physics Today and has since gained developed strong public interest in determining their origins and final disposition.  On August 29th NPR's Morning Edition aired an interview with Koeth & Hiebert.

Cyclotrons and Their Design – Summer 2020

For a complete list of publications, please visit my CV

The only type of institution of its kind in the world, the museum's mission is to serve as America’s resource for nuclear science and history.

The COVID-19 pandemic has unleashed a torrent of creativity from researchers eager to help society through this difficult passage.

When an important WWII atomic relic turned up out of the blue, two Maryland researchers wanted to know: what happened to the other 658 of them?